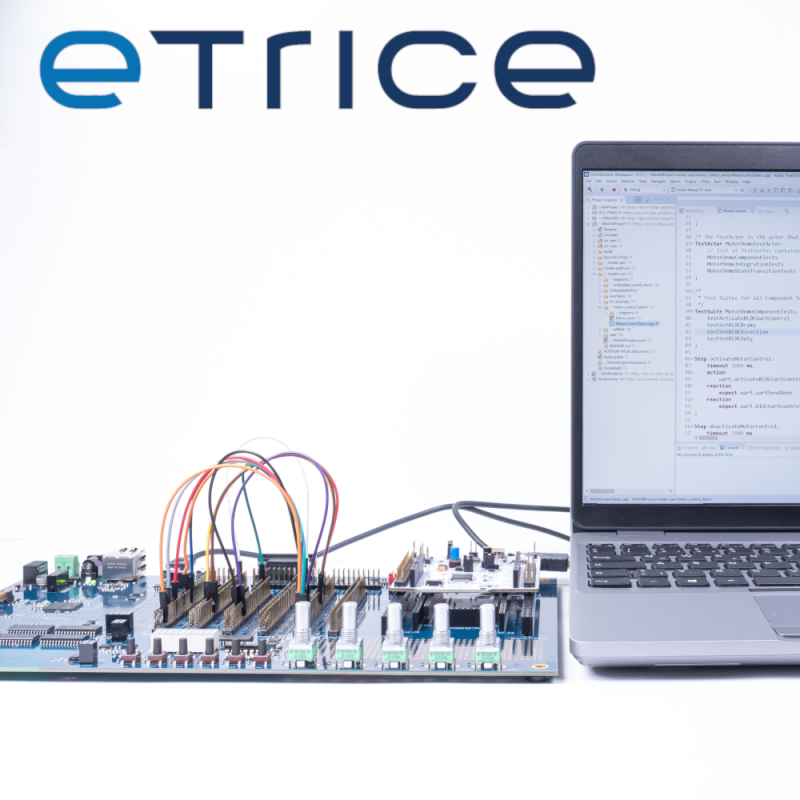 Modeling and Generation for Embedded Software with eTrice

Modelling gets products to market faster

A large part of new software is still written by hand in the respective target language. This approach allows implementing very specific solutions for programming tasks at hand.

On the other hand, there is for several decades the approach to model software and generate the source code from these models. As an example of this, the family of Matlab tools can be mentioned.

A prerequisite for the meaningful use of modeling and code generation in software development is that one is dealing with a class of similar problems. Examples of this are the programming of controllers or the creation and design of user interfaces from a library of widgets and layout components.

Under the aforementioned conditions, modeling and code generation in the area of software development generally offer the following advantages:

The advantages of modeling and code generation ultimately go back to a principle that we can call "abstraction and automation" and which is shown schematically in the following diagram. 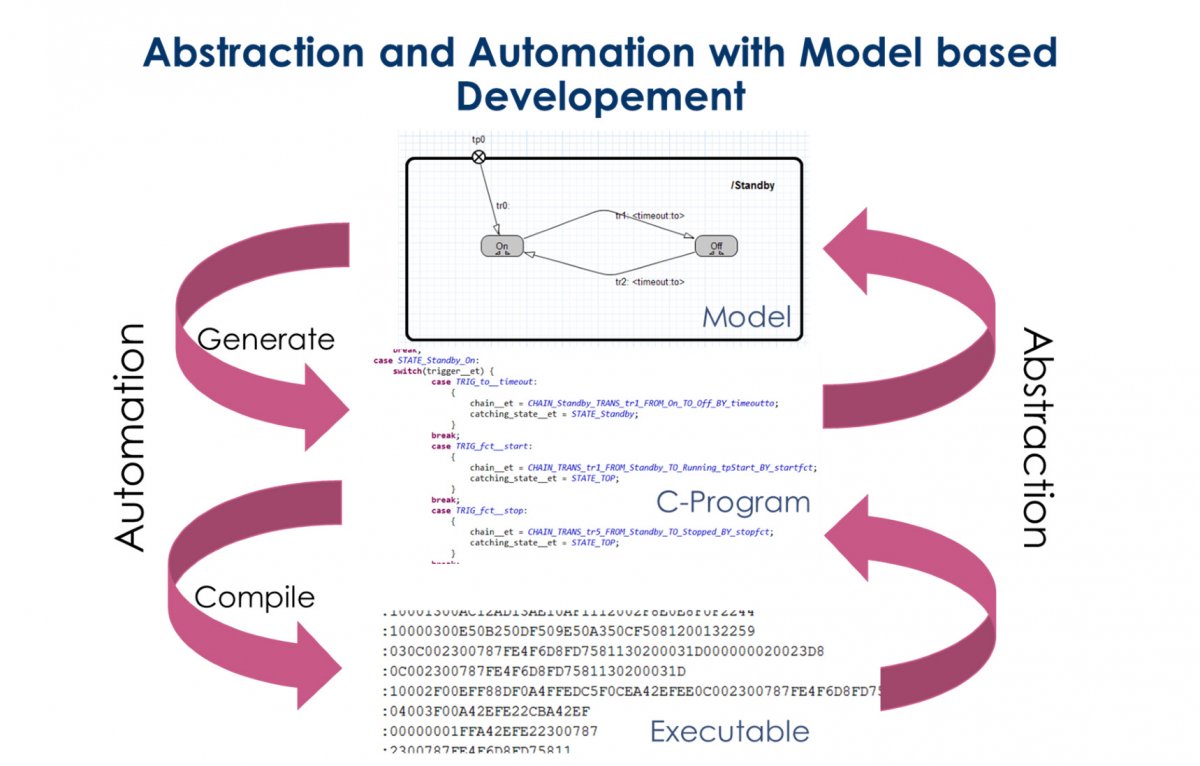 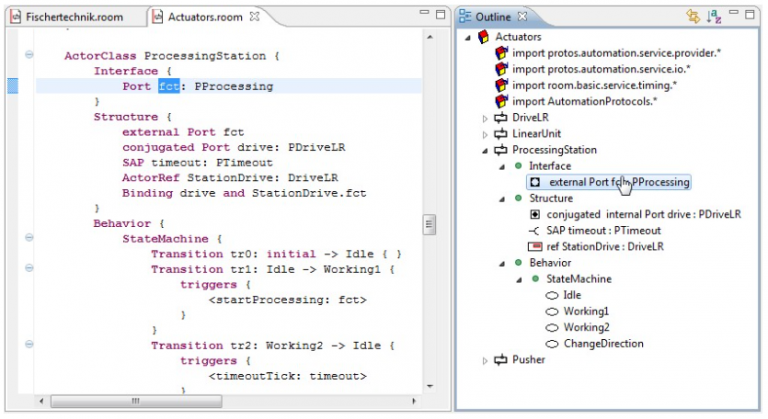 The models are stored in a purely textual and easily readable form. The textual notation is based on ROOM. There is a rich editor with keyword highlighting, content wizard, overview view and a library of text modules.

Models can import other models, allowing libraries to be created at any granularity.

Another advantage of textual models is that when working with a version control system, any merge conflicts that may arise can be easily resolved.

Graphical editor for the structure

This editor can be used to conveniently edit the structure in a diagram as an alternative to the textual representation. The diagram is based on the textual model and modifies it, but the layout is saved separately. The graphical notation is part of ROOM. 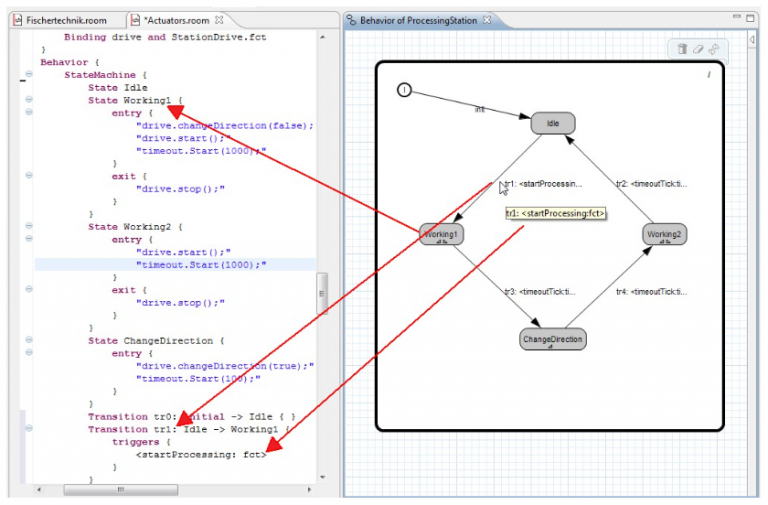 State machines, especially hierarchical ones, are much clearer in a diagram representation than in pure text. This makes it easy to create and arrange all the elements. The diagram is based on the textual model and modifies it, but the layout is stored separately. The graphical notation is part of ROOM.

eTrice has code generators in the target languages C, C++ and Java. The generation in C is designed for target hardware with scarce resources.

The runtime libraries include infrastructure such as messaging and debug support, such as generating sequence diagrams from the running application. Since eTrice integrates perfectly with JDT or CDT within the Eclipse IDE, very short development cycles are possible.

The great challenge in developing real-time software is its considerable complexity, which manifests itself in a whole range of different aspects. The Eclipse open source project eTrice helps you to master this complexity by its limitation to the essentials as well as by its simple, clear and at the same time powerful concepts.

A key feature of eTrice is its design for and openness to integration. This includes quite different aspects, which will be discussed in the following.

eTrice is not only suitable for event-driven systems. In addition to the message-based communication from ROOM, eTrice also offers the possibility of data-oriented communication. Thus, eTrice allows the encapsulation of control elements in actuators and their integration into an otherwise event-driven system. For example, models from the Matlab family can be easily integrated into systems modeled with eTrice,

By default, the behavior of eTrice actuators is modeled using finite state machines. However, it is equally possible to implement the behavior manually. A simple annotation in the model instructs the code generator to generate the code accordingly.

Integration with other Eclipse-based tools

Last but not least, the Eclipse IDE is a platform for integrating tools. Thus, eTrice can be conveniently used in association with CDT or JDT (depending on the target language). But since e.g. chip manufacturers also often offer an Eclipse-based IDE, eTrice can also be integrated there.

Basis for other tools

Of course, eTrice also integrates with other modeling tools. For example, CaGe, the modeling tool for tests from the Protos miniHIL product, builds on eTrice. Test sequences are generated by it as a ROOM model, from which eTrice then generates the target code.

The open source project Eclipse Franca allows generating eTrice actuators from specified interfaces, which implement these interfaces as mock-up. At the same time, an actuator is generated as a test driver.

But also on source code level, eTrice can be integrated into other tools, e.g. the graphical and textual editors for finite state machines.

How to use eTrice for embedded software modeling

PROTOS offers professional services for model-driven development of embedded systems with the open source tool eTrice. If you want to know more, please contact us!

Necessary
These cookies are absolutely necessary for the operation of the site and enable, for example, security-relevant functionalities. More information.

Statistics
In order to further improve our offer and our website, we collect anonymised data for statistics and analyses. With the help of these cookies, we can, for example, determine the number of visitors and the effect of certain pages of our website and optimise our content. More information.